Three Kurdish sisters from Erbil won a total of 12 medals, including nine gold prizes, in an international weightlifting competition that was held in the Kurdistan Region in late December.

Sixteen countries took part in the Arabic Champion for Weightlifting Youth, Junior Senior held in the town of Shaqlawa in the Erbil province from December 24 to 31.

The three sisters were part of Iraq’s weightlifting team. The youngest, Inas Muhsin, 20, won six gold medals and was named the sportsperson of the championship by the organizers of the event.

“My ultimate dream is to compete on international level be it the Olympics or the Asian competition,” Israa told Rudaw’s Muhammad Karezy on Tuesday. “It would be a great honor, to take part as a Kurdish girl.”

The sisters were trained by their late father Muhsin, who was a champion and an international certified trainer himself. He died of coronavirus complications last year.

“It has been ten years that we are doing this sport and we take part in Arab, Kurdistan competitions, we secured good results and that’s because we believed in ourselves,” the eldest, Oshin, told Rudaw’s Saman Welatzheri on Sunday. “All this goes back to all the hard work of our deceased father who helped us reach this stage.” 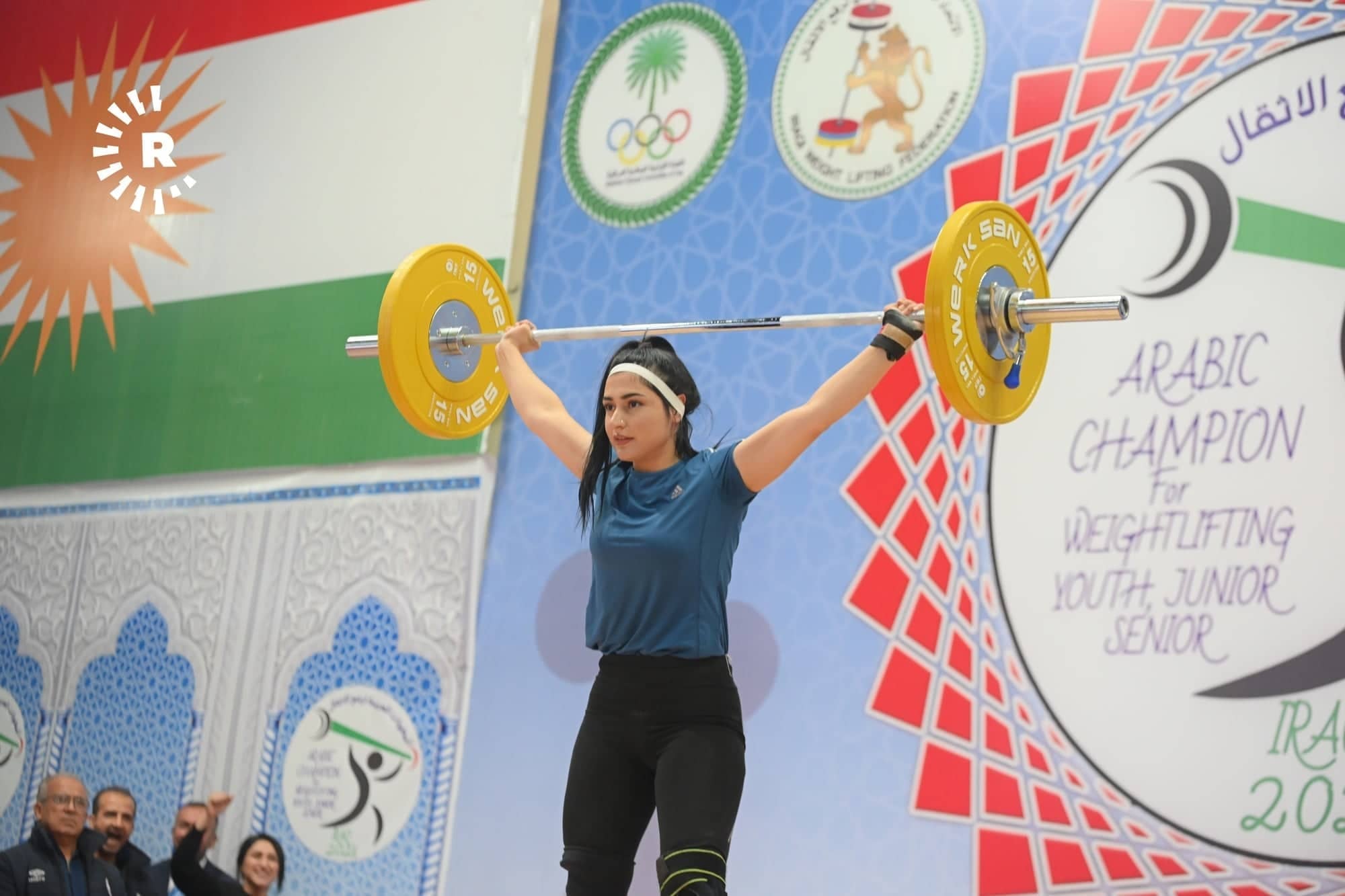 Inas Muhsin, the youngest of three sisters, won six gold medals and was named the sportsperson of the championship. Photo: Bilind T. Abdullah/Rudaw

Oshin noted that Iraq and the Kurdistan Region have neglected individual sports, which are games where only one person plays and competes.

She called on the authorities to pay more attention to individual players given the potential in the country.

“Every sportswoman wants to take part in bigger competitions, I call on the KRG and ministry of culture and those who are influential to take notice of the individual player,” she said. “We won all these medals and we have been neglected.”

Following the event, the Kurdistan Region Presidency in a tweet congratulated the youngest sister, Inas, for winning six gold medals.

“Without a doubt, I am very very happy, that the Presidency of the Kurdistan Region congratulated me, this is an important support,” she told Rudaw. “I hope to obtain better results in the next competitions and would be a great honor for Kurdistan.”

Kurdistan’s Weekly Brief December 14, 2021
A weekly brief of events occurred in the Kurdistan regions of Iran, Iraq, Syria, and Turkey. Turkey  The Pro-Kurdish Peoples’ Democratic Party (HDP) denounced the suspicious death of a female Kurdish political prisoner Garibe Gezer. The HDP said that Gezer “had been subjected to severe torture by prison guards” and “sexually assaulted,” accusing the...
0

On its international day, Kobani faces Turkish threat anew
The historic battle in Kobani was a victory for humanity and a symbol of the internationalist resistance against the brutality of ISIS mercenaries, who, with the support of regional countries, led by Turkey, failed to occupy countries under the false Islamic cover and revive the Ottoman Caliphate, so that Turkey...
0

Thousands call for justice six years after mass murder of 104 people in Ankara
A public press statement in Istanbul turned into a demonstration of thousands as people called for justice for the victims of arguably the deadliest bomb attack in the history of the Turkish Republic. A commemoration event was held in Istanbul, Turkey, on the 6th anniversary of the Ankara massacre on Sunday. Families...
0

Panorama of Week: New Russian move towards Israeli raids on Syria, Erdogan deepens crises with West
Russia has begun to follow a new policy on Israeli raids on Syria, while Erdogan is deepening his crises with the West and this time from the Cyprus gate through his quest to impose Turkish Cypriot control on part of the Varosha city. The last week’s Arab newspapers discussed the...
0
Köşe Yazarları TÜMÜ

The struggle against isolation is important for the liberation of politics, says Temelli
0