Sebahat Tuncel: The ‘Witch’ in the Middle Ages, is the ‘terrorist’ today

Anasayfa » Kurdistan » Sebahat Tuncel: The ‘Witch’ in the Middle Ages, is the ‘terrorist’ today
Kurdistan Türkiye
0
0
A+
A-

Imprisoned and with ongoing trials against her, prominent Kurdish politician reflects on being a “witch” in the modern era.

Sebahat Tuncel, former Co-Chair of the Democratic Regions Party (DBP), one of 17 women politicians who are being tried in the ‘Kobani trial’, shared her evaluations with Jin News regarding the first hearing of the Kobani Trial, which was held on April 26.

Sebahat Tuncel was taken from the Kocaeli Kandıra No.1 Type F Prison to Sincan Prison in the Turkish capital, Ankara, for the Kobani trials. She is still being kept under “quarantine measures” in Sincan Prison, where she answered the questions of Jin News by way of a letter that she wrote.

”For us, the trial process will be a struggle for a democratic legal system, freedom, equality, democracy and peace. Another life is possible as long as we can increase solidarity and the struggle,” she said. 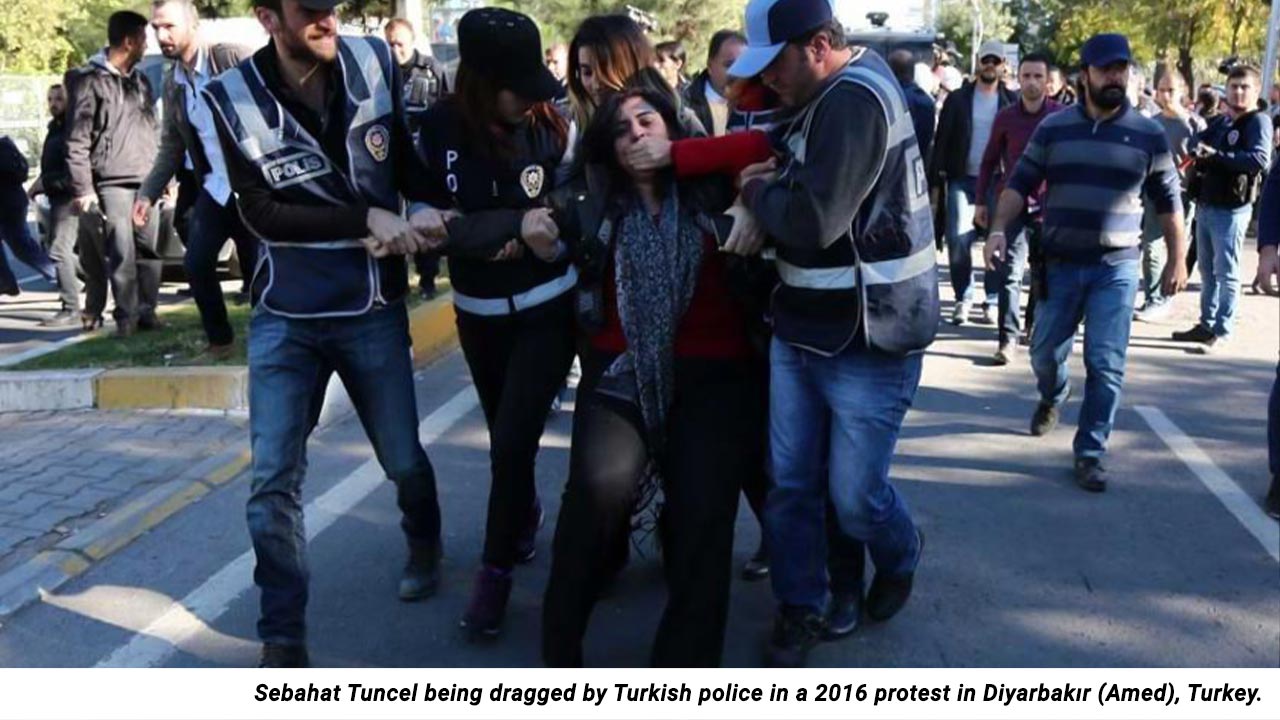 Tuncel stated that the detentions and arrests of the Kurdish political movement and the friends of the Kurds resembles the process in which millions of women were murdered for allegedly being ”witches” in Europe.

Tuncel quoted the words of sociology professor Maria Mies, ”the persecution of witches was not a remnant of the dark Middle Ages, but the manifestation of a rising modern society.” Tuncel said. ”The male-dominated system was an expression of the elimination of women’s influence in the social economy, politics and science”.

“The pressures against democratic politics reminds us of witch hunts,” She said and added, “Those who were called “witches” in the Middle Ages are now labeled as ‘terrorists’. “The concept of ‘terrorism is used in such a wide sense in Turkey that almost everyone who does not give allegiance to the ruling power is portrayed as a ‘terrorist’.”

”The independent judiciary means nothing more than a discourse that shows the connection between the rulings powers and the government. We were faced with the court judges who are acting more like the heads of the AKP-MHP’s legal commission. We witnessed this once again at the Kobani trial. We as Kurds are not familiar to these practices. We encountered a similar approach in Independence Courts, State Security Courts, Heavy Penal Courts”.

Tuncel underlined that they were faced with “legal force and pressure” in the person in charge of the 22nd High Criminal Court at the hearing held on April 26. “It is obvious that the president of the court wants to take a place in politics in the coming period. Therefore, instead of legal requirements, it acts according to the requirements of the President. Of course, it is certain that there will not be a fair trial. So, it will be a field of struggle for a democratic legal system, freedoms, equality, democracy and peace”.

”The only obstacle left to the construction of the new regime (one-man regime) alliance is the HDP, which expresses the united organised power of peoples, beliefs and women’s freedom. The democratic, ecological, women’s liberal administration system represented by the HDP gives hope to the peoples. In fact, it is exactly this hope that is targeted and attempted to be broken with these trials but it is a futile attempt. For a century, the Kurds have been resisting all kinds of state violence, oppression and cruelty. This tradition of resistance continues today. Results of the trial will affect the politics and future of Turkey. Therefore, everyone who supports democracy, equality, freedom and peace should be in solidarity with the HDP in this process. Not for the HDP, but for themselves”. 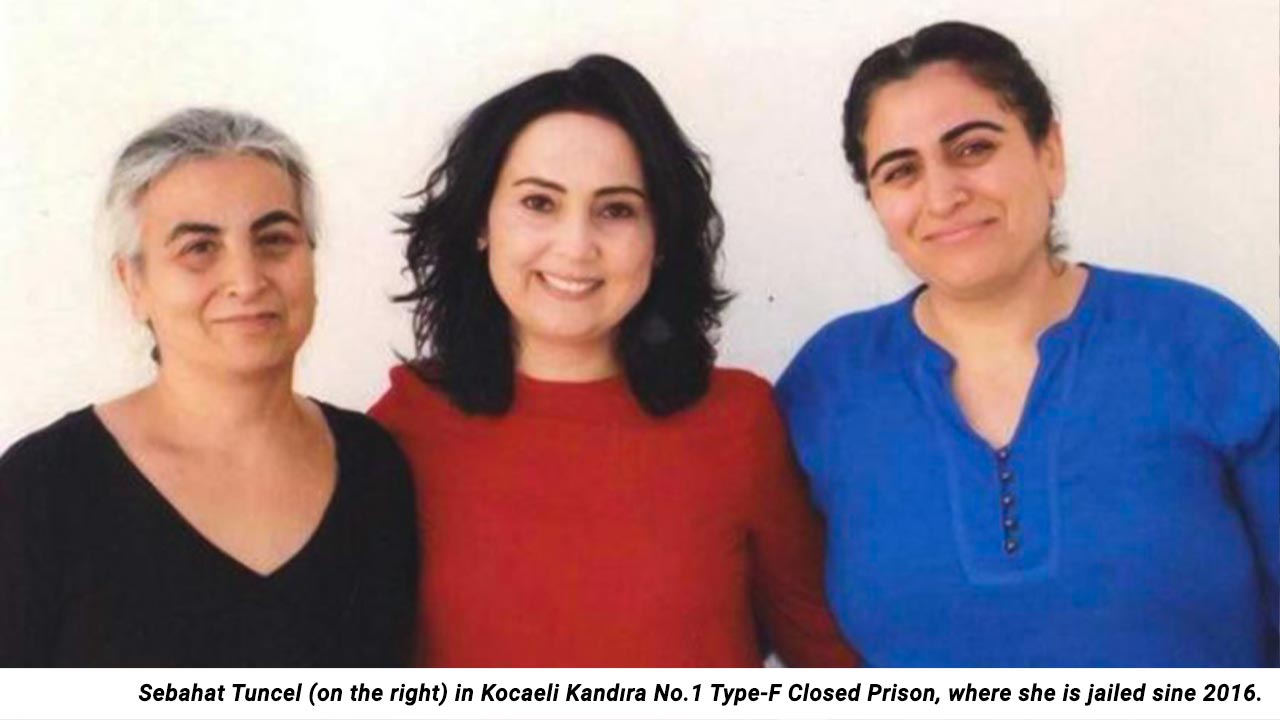 Tuncel emphasised that these lawsuits also target women’s freedom and since 2015 there has been an attack on the Kurdish women’s movement in particular. Tuncel said, ”Appointed trustees targeting co-chairs, women’s institutions targeting women’s gains in local councils, the withdrawal from Istanbul Convention overnight, the increase in violence against women and targeting women’s freedom. We see also same the approach in the Kobane Case. While the leading role of Kurdish women in defeating ISIS gangs and the leading role of women in the Rojava Revolution are supported by people and women all around the world, Turkey has turned this into a subject of judgment. In fact, this case is on the grounds of the defeated ISIS, which Turkey was supporting, has no other meaning than the Turkish judiciary seeking revenge for that defeat. As everybody knows, the real culprits responsibile for the so-called October 6-8 incidents that caused the dozens of deaths was the government and their effort is to cover this truth with this trial,” she said.

Tuncel said, ”You may remember in 2014, people all over the world took to the streets and November 1 was declared World Kobane Day.

This international solidarity played a very important role in the liberation of Kobane and the defeat of the ISIS gangs. The solidarity shown by the Kurds living in Turkey, their friends and the HDP. In the next period, the solidarity of defending rights and waging common struggle will win”.

Underlining that the main reason for all these events is the Kurdish issue, Sebahat emphasised that AKP’s termination of the dialogue process with the PKK leader Abdullah Öcalan has dragged Turkey into an economic, political and social crisis.

Tuncel continued “It uses all the means of repression of the state upon the society and continues its war policies against the Kurdish people and wants to suppress the political, cultural, economic and ecological demands of the Kurdish people.

The latest Newroz celebrations showed clearly the only way out of this chaos and crisis is for Turkey to put an end to it’s anti-Kurdish policies. Primarily, an end to the severe isolation policies imposed on the Kurdish leader, Mr. Öcalan, and look after his health and safety and that he must be given the conditions to be able to enter serious dialouge to end these policies of war, conflict and non-resolution of the Kurdish question. This policy affects not only the Kurds but all the peoples of Turkey. For this reason, it is more urgent than ever before for the forces of democracy and freedom to be more active in this process and offer a new way to the peoples of Turkey. Another life is possible as long as we strengthen our own self-organisation, increase solidarity and the struggle.”