Families of the nine detained Kurdish migrants are calling for their urgent release from the Turkish-backed Free Syrian Army, as thousands of Kurds take illegal and dangerous routes in the pursuit of a better life they continue to believe is found in western Europe.

Damavand Paksrisht, 32, had been trying to migrate to the west for years, but faced major obstructions due to his financial situation. His marriage brought some hope for his family, who thought he would give up on his attempts to migrate, yet despite having a one-month-old daughter, Paksrisht embarked upon his journey this summer, unaware that he would fall into the hands of militants.

Paksrisht was among 66 Kurdish migrants arrested in the Turkish city of Aksaray on August 21. Eight migrants were from the Iranian city of Paveh in Kermanshah province, with an additional migrant from Iran’s Sardasht city, and the rest drawing from the Kurdistan Region.

The migrants identified themselves as Syrian in an attempt to avoid being deported to Iran and Iraq, but the Turkish police handed them to the Turkish-backed Free Syrian Army (FSA). The migrants from the Region were released 11 days later, but the fate of Paksrisht and eight other migrants named Moubin Valadbaigi, Afshar Roustami, Bahman Shadravan, Masoud Haidari, Saeed Ahmadi, Fardin Darvishpour, Hidayat Rokhzadi, and Samran Khizrpour remain unknown.

Their families who have lost contact with them for months are urgently calling for help.

“These people all went to Turkey on different days, but they got together there, we were aware that Turkish police arrested them in Aksaray, but we found out that they are detained by the Free Syrian Army around a month ago from other released migrants,” Rashin Roustami, the sister of one of the migrants who is running social media campaigns calling for their release told Rudaw English.

Roustami said that they had tried to look for them through the Iranian foreign ministry and the Turkish embassy in Iran, but their efforts have been so far fruitless.

The family last spoke to their loved ones on October 9 through the Turkish Humanitarian Relief Foundation (IHH), with each migrant allowed just a minute to speak to their families via WhatsApp.

According to Roustami, her brother had told them that they were detained by the FSA and they were promised release within ten days. “The phone call was short and we did not get to talk much,” she said. “I asked about the place they were detained in and he said that ‘it is not bad.’ After that, despite many efforts, we have not been able to reach him.”

On Wednesday, the families of the migrants gathered at a house in Paveh, holding the pictures of their missing children, husbands, and fathers. Mothers cried, as many continued calling on their phones in hope of reaching them.

News of his son’s arrest gave him a heart attack

One of the families hit hardest by the tragedy are the family of Paksrisht. According to his brother Bestoon, his family had warned him of the dangers of migrating since 2015.

“Two years ago, Damavand got married and we were sure that he would not leave, but just when his daughter was born, a month later he decided to leave due to poverty and unemployment, and we could not stop him,” Bestoon told Rudaw English. “On April 28, he left Paveh. He tried to cross from Turkey a few times, but he was arrested.”

Bestoon believes that the nine migrants, along with the 57 from Kurdistan Region, followed the instructions of the smugglers by not giving their real names and defining themselves as Syrian citizens in order to avoid being deported to Iran or Iraq. They were then taken to Gaziantep, where Paksrisht told his brother they would be released.

“I then lost contact for around 20 days, until the 57 migrants from the Kurdistan Region were released and called me saying my brother and eight others were in Syria. When my father heard this, he had a heart attack,” Bestoon said, adding that his father is alive but remains frail. “The last time Damavand talked to me was on August 9 for one minute saying they are in al-Bab in Syria, and they were promised to be released.”

After the increasing economic crisis in Iran over the past four years due to sanctions imposed by the US administration under Donald Trump, a large number of Kurdish youth have tried to reach Europe through illegal routes, leading to several tragedies.

“We have been married for five years and have a two year old son. Due to the lack of jobs in Paveh, we moved to the city of Talesh in northern Iran, but our situation was bad there as well, so we decided to collect our savings and send Moubin to Europe and then he could take us,” Soma Alyasi, the wife of Moubin Valadbaigi, told Rudaw English. 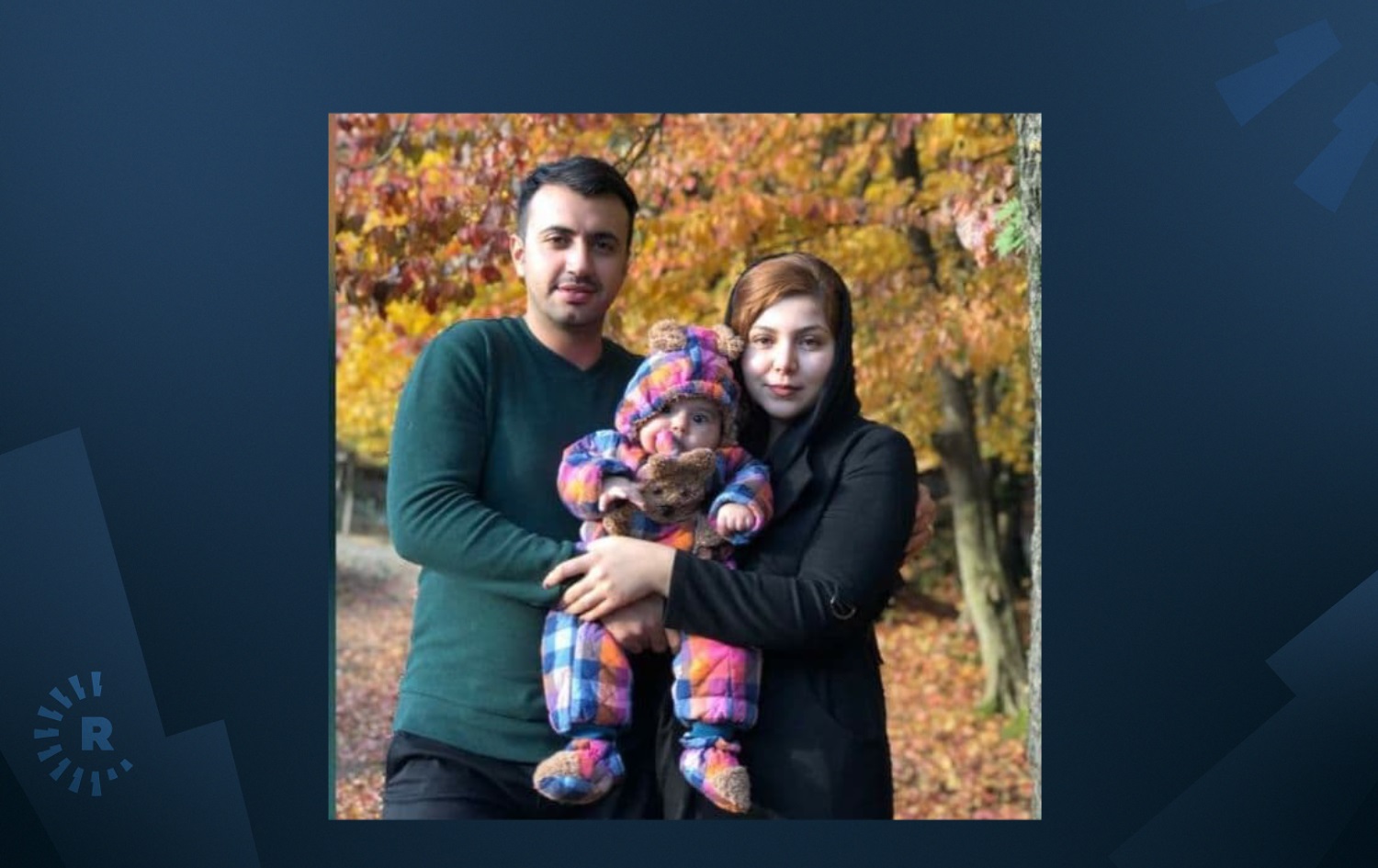 Moubin left Iran on June 21. Alyasi had accompanied him to the airport in Tehran and kept contact with him via WhatsApp, sending him money every now and then, but she also lost contact with him for around 20 days. She then found out through one of his friends’ families that he was captured and sent to Syria. The news has given Alyasi continuous nightmares; dreams in which her husband is killed.

“In his latest call from Syria, his face had changed a lot, I could not speak because of crying and my son could not recognize him,” Alyasi said. “In the past few months, we have tried everywhere but we have not been able to do anything.”

The 60-year-old mother of Saeed Ahmadi, Sakina Gomari, told Rudaw English as tears streaked down her cheeks that she had, “raised Saeed without a father since he was five years old, he took the path of Europe to escape poverty, and now I am alone with a 20-year-old son of mine, we have no source of income and receive help from charity groups.”

“I do not know who has taken my son but I ask them that a poor and lonely mother is asking you to release her son,” she begged.

Something rotten in the Kurdistan Region of Iraq – a weekly news review By Sarah GLYNN
It is now over seven years since most of the world learnt about the Yazidis. For a short time, international media carried international hearts to Iraq’s Şengal (Sinjar) Mountains, and to the families fleeing genocide and sexual slavery. But news keeps churning, and cameras and sympathy are now focused elsewhere....
0

Turkey: Police attack commemoration for Ankara Massacre of 10 October, many detained
Police have intervened in a commemoration outside Ankara Station for the 6th anniversary of the Ankara Massacre of 10 October, in which 104 people died in an attack by the Islamic State of Iraq and Syria (ISIS). Several arrests have been reported. Following a decision issued by the Governorate of...
0

Coelho and Rushdie censored in Turkey: the word ‘Kurdistan’ removed from Turkish editions of their novels…
When readers noticed that the word “Kurdistan” had been censored in a Turkish translation of a Rushdie novel, they reacted, and a quick assurance came from the publisher that the book would be recalled for correction. However it emerged that previously, a Coelho novel had been similarly censored, followed by...
0
Köşe Yazarları TÜMÜ

Joe Volpe
Change Minister (Lecce)or change advisors
The provincial election is June 2, four and a half months away. That will explain everything one needs to know to understand the government’s “puzzling” recent decisions re the Omicron variant. There will be no Science Table or “Science experts”...

Kurdistan’s Weekly Brief January 18, 2022
A weekly brief of events occurred in the Kurdistan regions of Iran, Iraq, Syria, and Turkey. Iran A Sanandaj court sentenced a Kurdish environmental activist named Armin Aesparlous, who was arrested in October 2021, to one year in prison for “cooperation with the Kurdistan Free Life Party (PJAK).” Further, Iranian security...
0